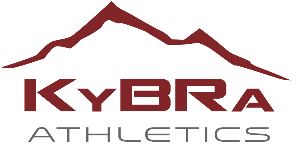 It’s taken me a long time to write a race report because this race was really tough because the conditions of the swim were more than just uncomfortable for me – It brought back a painful moment of my life and a fear that I have spent years trying to overcome.

This was a tough race – physically, mentally and emotionally. Honestly, I was scared. I was scared that  after dedicating eight months of serious training I would discover that I wasn’t a strong triathlete or that an injury or mechanical issue would cause me to DNF. But mostly, I was afraid of the swim. 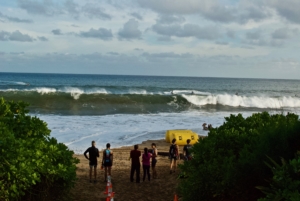 Even though I didn’t do as well as I hoped, I conquered my biggest fear. I am afraid of water. Especially, I’m afraid of waves.  As a teenager I lost my brother to rough water in Lake Erie. A casual hot summer day swim took my brother and best friend away from me forever. If a small Lake Erie wave was strong enough to knock over a 20 year old man causing him to hit his head hard enough to kill him, then what could these strong ocean waves do? 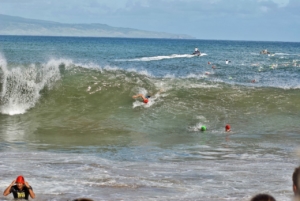 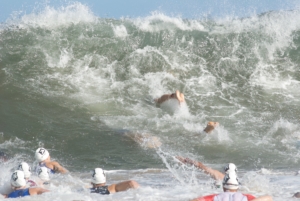 On the morning of the race the waves were huge. They were the largest ever at an Xterra Championship race. The day before I heard many stories from racers about their horrible pre swim practice and even had a good friend hurt her back so badly from a wave knocking her down that she had to drop out of the race. I let these stories take over my mind like a bad fungus letting my fear of water control me. I had a break down the morning of the race. A full body shake, tears rolling down the face, I WANT TO QUIT kind of break down. My husband pulled me off of the bathroom floor and reminded me that I was in control. That unlike my brother or many of the other racers I was trained and experienced in whitewater (I use to be a raft guide and river ranger). He reminded me that I knew how to time waves, swim in current, handle crashing waves, and most importantly, stay calm. I knew that I would be disappointed in myself if I didn’t finish this race. So pulled myself together and chilled the fuck out. 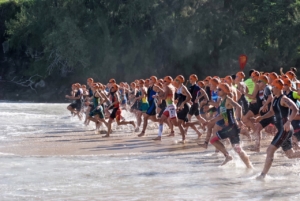 I anxiously stood on the beach with about two hundred women waiting for the cannon to go off. At this moment I told myself that I had a job to do and reminded myself that you get hurt when fear is in control. The cannon sounded and we charged at the waves. We were lucky that the set of waves coming in were fairly calm. Once past the break the swells were huge, but the current wasn’t very strong. Later I heard from some other racers that the swells caused them to get sea sick. I reached the first marker with no problem and was able to reach the beach without any waves breaking on me or funky current pulling me under. I was feeling good. However, the women’s swim leg was not as fortunate their second round. The swim course required us to swim 800m out to a marker, swim back to the beach, run down the beach then re enter the water to another marker 800m away. The set of waves coming in when it was time for us to swim to the next marker were huge. And with such a shallow break they were pretty violent. Faces were filled with fear and I could hear racers screaming and crying. Goggles and swim caps were being ripped off of their heads, racers were DNF’ing from injuries and lack of confidence that they could successfully complete the swim. It was a shit show. I froze for a moment. It was like I was in a dream of crashing waves and panicky people. I really wanted to quit, but I reminded myself that I had a job to do. I fought my way past the break. Ducking under waves only to be tossed around like a pair of jeans in a washing machine. Every time I had the opportunity to come up for air I had to quickly duck under again to avoid another wave crashing on my head. I was already out of breath from swimming the first 800m and a beach run, but I made it past the break. The swells were still big, but this time the current was also strong. I was pushed to the left so much that I probably swam a mile to get to the marker that was only 800m away. Reaching shore I was attacked twice by a breaking wave. Waves on a short break tease you. Just when you think that your time underwater getting slammed into the sand is over and you can finally get air a secondary reaction wave comes at you tossing you around a little longer. When this happens it’s important to stay calm and go with the flow don’t fight the current, but that is easier said than done. It was such a relief to feel dry sand on my feet. 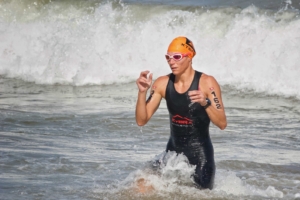 The swim was emotionally and physically exhausting. I usually feel great after a swim and can jump on my bike strong. But, this time my legs felt like heavy lead and my stomach was really nauseous from all the salt water I swallowed. I had a few miles of a steep climb on a paved path before entering the sloppy mess of single track trails. This is where the frustration began. I spent months training to ride steep long hills and I was ready. However, the conditions of the trails were so awful that about 75% of the bike course was spent carrying or pushing your bike. Even pushing your bike your bike tires would fill up with mud causing the wheels to stop moving. I would push really hard on the steep climbs gaining a lead on my age group competitors only to have them pass me later because I was pulling mud out of my bike. A few descents I was able to ride, but I ended up going over my handle bars and hitting a tree after coming around a corner reaching a group of people walking their bikes and having to quickly grab my brakes. It must have been an impressive crash because three men jumped off of their bikes to make sure I was ok. That crash didn’t cause anything more than bruises, but a small fall later on the course caused me to land on my wrist badly. I still can’t move it without pain. 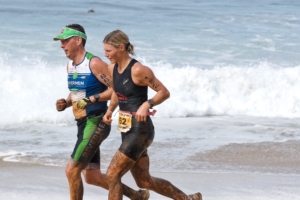 The run course was muddy, but runable in most places. A few of the steep hills were slippery enough that you had to grab branches and saw grass to pull your way to the top. When I could run I held a decent pace and was feeling pretty good. Until, my stomach decided that it had enough. The salt water I had swallowed along with anxiety, hot weather and an extra long bike course took a toll on my stomach. I threw up three times during the 10k run.

I wish the race would have been different. I wish the weather was great and trails were dry so I could have seen what I was physically capable of. But if this would have happened I would have never learned what I’m mentally and emotionally capable of. It was an incredible honor to race with the best in the world. 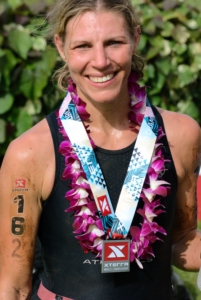